Kristin O
Some facts about us: Together since May 2004, Matt & Kristin Married in May 2009. Between the two of us, we've lived in California, Hawaii, Guam, Japan and met here, in good ol' Virginia. We adopted two mini schnauzers, Hemingway & Mya aka The Pups. We bought our first home in May of 2011 and are ridiculously excited for all the DIY projects ahead of us.

Well, it was a good move anyway.  If someone tells you their move went absolutely perfectly, well I'd like to meet them.  We were scheduled to close on the house May 2nd.  On May 1st, Matt came home with two surprises in his truck.  He found 2 small kittens at the gas station jumping onto peoples tires / engines.  Animal lover that he is (this isn't the first stray he's brought home) he rescued them from certain death (well at least we'd like to think so.)

We decided to take care of them until we get moved in and settled before we started looking for a home for them.  Sounds easy enough...  but between taking the pups out in the morning, afternoon, and most evenings and the multiple feedings the kittens needed it was definitely a rough week.  Oh, and I forgot to mention closing on the house, painting 90% of the interior and moving in all in the same week.  Yeah, we're a tid bit crazy.  But at least we're a crazy team.
I'd like to now formally introduce you to the kitties.  We did not name them, in an effort to make sure we didn't end up keeping them.  We aren't going to have the time to give them what they need in the first few weeks/months of there little lives so it was best for another family to have them.
We lovingly referred to them as Miss Kitty (1) and Miss Kitty (2).  And also, "Black Kitty" and "Striped Kitty".  It sounds horrible but it's better than "Hey you, cat!". 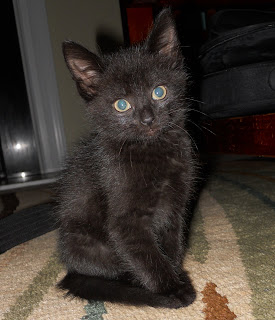 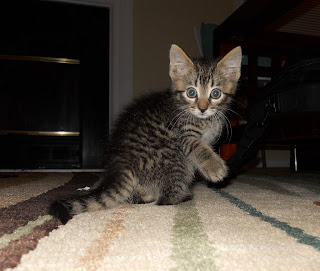 Aw, aren't they adorable?  The little sisters were so sweet.
And such trouble makers!  It was so fun to watch them interact with eachother, us and Hemi & Mya. 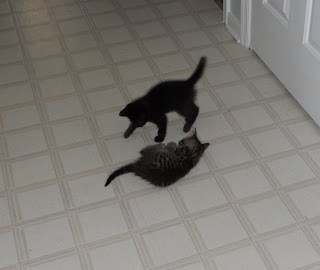 When they weren't running around like mad (which was 99% of the time) they had they're sweet cuddly moments.  I found them huddled between boxes taking a nap. 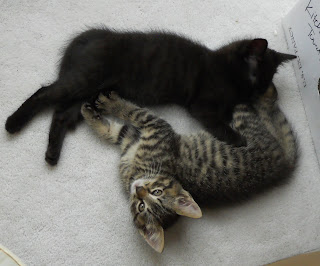 After two weeks of loving the kitties we found a home for them.
We said our goodbye's and will miss the little ladies!  Of course, until we found out they were actually boys.  Shocker!  We still giggle about all the "Aw, they're sisters" and the "Come here Miss Kitty, you're so pretty".  So, we'll miss the little guys.

But really, we're just so happy they are in a loving home and are getting all the attention they deserve. 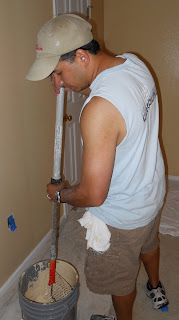 After closing on Monday morning, we sat around with the "Really, that's it and it's ours?" faces and then the "OMG I'm so excited" jumping and clapping moments (that was mostly me).
Then the hard work came. Matt started painting the interior.  The bank didn't paint the house prior to us moving in.  Although, all the paint colors were pretty, we needed a fresh coat throughout.  We started thinking it would be mostly done between the two of us. Well, luckily we have family that came to the rescue to help us anyway.  Looking at it now, there was NO WAY we could've gotten as much done in 5 days if we didn't get this outpouring of help.  Extreme shoutout to Mom, Dad, Rod, Carm, Song, Rich, Mel and Ray.  Hours were spent, all after 5pm when everyone got out of work and well into the early morning some nights by everyone in some form.  We are so thankful and know how fortunate we are to have great families. 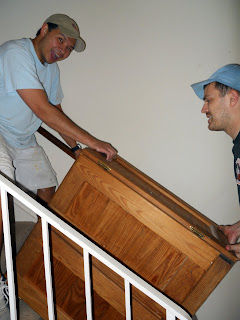 As for the move, I can't believe we had so much stuff fit into our little apartment.  It was pretty unbelievable.  We had lots of help (another shout out to Drew, pictured above, Jackie, Mom, Dad, Brandon, Kristen B, Marissa and Rich).  We got the truck loaded and unloaded most of our stuff in one night.  The rest went the next day.
Here is a peek at the formal rooms aka "the dumping ground" as things were coming off the truck. 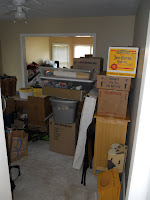 We had and still have a lotta work ahead of us.  Fortunately/unfortunately this blog post is a little late and at this point we've really tackled a good amount of the unpacking.  I promise to post soon on each room and the colors we chose.
Sorry for the ridiculously long post but I hope you enjoyed the rambling on anyway!
Posted by Kristin O at 12:17 AM

This blog is for positive people with positive things to say! If you don't fit that category, please see my imaginary blog door and keep walking. 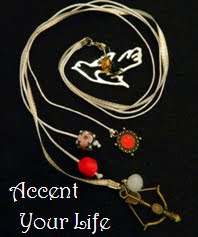 Affordable Jewelry for a Fabulous Life